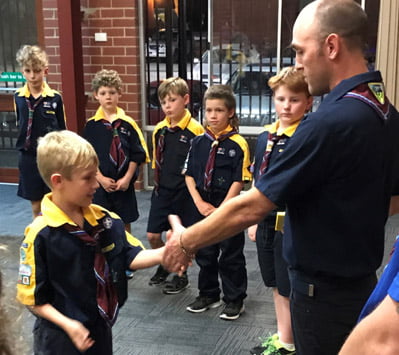 Attending Enduro, one of the biggest Scouting events on the calendar, was a dream come true for 8-year-old Eli.

Having been diagnosed with autism and anxiety at a young age, the adventurous little boy struggled with every day activities and social situations.

A psychologist suggested to his parents that Scouts would help Eli’s development by getting him involved in an activity that fit with his interests and gave him opportunities to build his social and practical skills. With that in mind, Eli’s Mum and Dad took him along to their local Scout Group in Bullsbrook where they met some amazing leaders that would ultimately change Eli’s life.

At the beginning of his Scouting journey, Eli struggled with meeting new people, being in large groups and the loud environment. However, determined to participate each week and with the goal of one day being able to attend camp, he slowly overcame these day-to-day obstacles. One of the biggest challenges for him was attending Scouts without Dad there.

Together with the support of the Leaders and his parents, Eli worked through different scenarios and reached a point where he could attend activities inside and outside of the hall without needing Dad to be present.

Ten months later, equipped with ideas and plans mapped by his Pack and Cub Leaders to tackle his fear of being alone, Eli attended the four-day, three-night Enduro Camp. Eli helped his Cub Pack prepare meals, plan and participate in hikes, and learned new camping skills.

The Manjedal Activity Centre hosted more than 1,250 youth and adult leaders during Enduro, with plenty of hype and loud noise that could be overwhelming at times for Eli. Thanks to his leaders and accommodating event organisers, Eli had his own quiet space where he could regather himself and continue when he was ready.

Eli’s dad tells all those involved at Bullsbrook Scout Group, that Eli’s psychologist is blown away with the progress and self-confidence he has achieved through his involvement with Scouts.   Eli continues to be a valuable member of his Cub Pack and is well on his way to earning his Gold Boomerang and Grey Wolf badges.

Eli’s perseverance and determination has inspired us all and is the perfect example of what it means to be a Scout.